Ten years after attending my first Kerrville Folk Fest, I finally got to play it.

The show was super cool. Will Owen Gage, a bad-ass guitar player from Austin, opened up the show with some acoustic blues. He could really work that guitar.

Then it was me, Graham Warwick, John Ike Walton, and John Sprott… we played a bunch of those fun songs that Graham has written. We were then joined by Will as well as Lindsey (playing trombone) and Michael D’Eath on harmonica. What a great time! 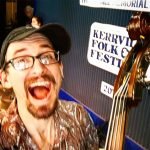